Fetlock boots are much shorter than gaiters. They are used to protect against injuries caused by stroking (when the horse's fetlocks touch while moving).

Here you can find an overview of the different types of fetlock boots. The sizes of fetlock boots are usually indicated as S, M, L or WB for horses and P for ponies. When choosing the size, use the size of hard shell gaiters as a guide. If the selected size does not fit, you are of course welcome to return the products to us after trying them on (clean and undamaged) within the return period. 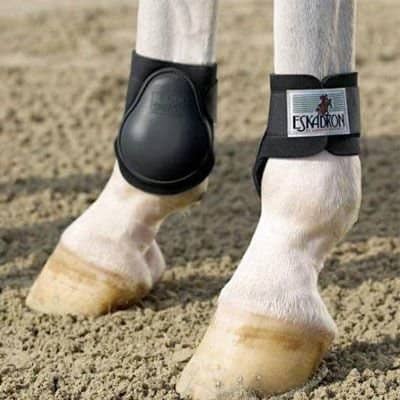 You have probably already seen and used simple fetlock boots. This simple variant consists of a hard plastic shellwhich lies on the inside of the fetlock head and a comprehensive neoprene fabric with Velcro fastener. Due to the simple "construction", these fetlock boots for horses are often inexpensive and available in many different colors. 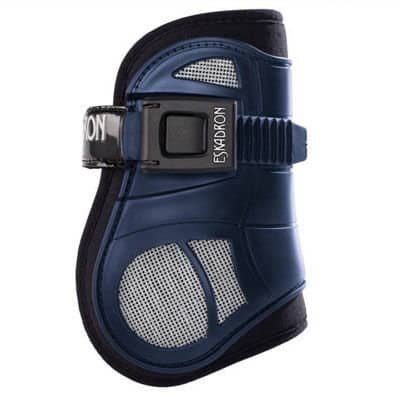 Closed fetlock boots not only protect the inside of the fetlock head, but also encompass the entire bondage head, much like a gaiter. Like gaiters, they are also often made of plastic and neoprene or leather. Such a fetlock cap is useful for the terrain if you already ride your horse through vegetation, or if your horse tends to "step away" with its hind legs and thus hit the band or the edge of the hoof. 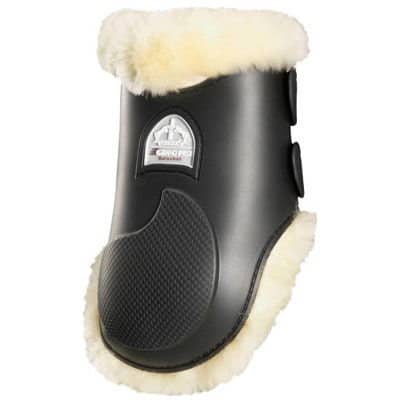 As with gaiters or bell boots, you also get fetlock boots with a fur edge, or even a complete fur lining. This can consist of lambskin or artificial fur and prevents chafing.

Fetlock boots - what materials are there?

As with gaiters, fetlock boots are often harder Plastic shell and neoprene lining available. These products are very easy to care for because they can be hand-washed at 30 ° C. Some fetlock boots even survive cleaning in the washing machine. Please note the washing instructions for the product. Plastic fetlock boots come in many colors, but the most popular colors are still brown and black. Fetlock boots Leather and synthetic leather are not that common, but they look classier. Fetlock boots made of leather are particularly elegant in the set with the matching gaiters. The natural material is soft and supple and effectively protects the horse's leg from injuries. Leather fetlock boots should be cleaned with an appropriate leather care product.

Put the fetlock boots on properly

Basically, you should of course have chosen the right size for your horse. Similar to gaiters, the fetlock cap should fit snugly, but not pinch off. Close the caps properly on the outside. If the latches were on the inside, the latches could hook and open. Doing so would be very dangerous and could result in injury from tripping over. Fetlock boots are available with Velcro fasteners, button fastenings made of rubber and metal or buckles. Make sure to close the fetlock cap firmly, but not with force. If you have chosen an anatomical fetlock boot, the shape must absolutely fit the fetlock head. The Carpal joint must remain free to ensure unrestricted movement. A simple way to put on fetlock boots is to put them on the leg a little above the fetlock head. Now let the fetlock cap slowly slide down onto the fetlock head until it snuggles into the correct place.

Fetlock boots on tournaments according to WBO and LPO

A particularly popular brand is Veredus. The fetlock boots and gaiters from Veredus protect horses' legs very effectively with high-quality materials and innovative technologies. Veredus offers various series of fetlock boots and gaiter sets. You can choose between a Velcro or rivet closure. The fetlock Veredus per jump is a shockproof ankle protection with an anatomically shaped shell made of polyurethane and an inner lining made of neoprene. It is available in brown or black and encloses the entire fetlock head. The variant Veredus Pro Jump Save the Sheep fetlock boot has an inner lining made of artificial lambskin. This technical fabric is easy to wash and dries quickly. The wide and fluffy mesh allows Sand escape more easily, thereby avoiding friction. This protects your horse's legs.
A technically more sophisticated version is the Veredus Carbon Gel Vento fetlock boot. This is of course also available as a matching gaiter. This fetlock boot has double ventilation through a micro-perforated neoprene AEROX and 3DMesh-Fabric guaranteed. In addition, a combination of carbon and Nitrex gel effectively absorbs shocks. This fetlock cap is also available in brown and black as well as with the artificial lambskin from the Save the sheep Series available.
More fetlock boots series from Veredus are Young Jump Vento, Grand Slam Carbon Gel, the fetlock grand prix and the fetlock fetlock Olympus.

Just as popular as Veredus are fetlock boots from Eskadron. These are always available in a color matching the gaiters. Eskadron Fetlock boots consist mostly of a hard plastic shell and an easy-care neoprene lining. Eskadron HO Air Easy fetlock boots offer a dynamic look, high security and very good ventilation. The fetlock cap consists of an additionally reinforced TPE outer shell in the rear area and a neoprene inner lining with air holes. Grid-protected air channels in the outer shell also ensure ideal air circulation. The special click lock is reminiscent of locks on inline skates and enables quick and easy locking, as well as individual adjustment to the horse's leg.
Eskadron also offers fetlock boots and gaiters in pony sizes.