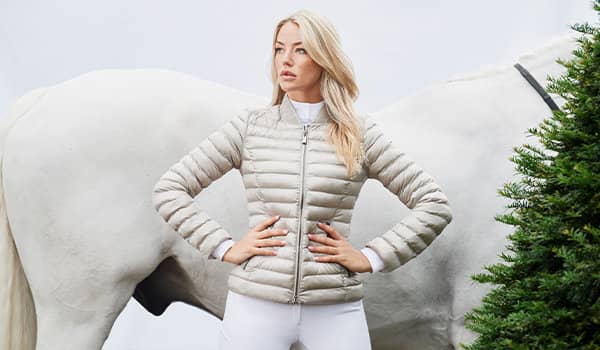 Hardly any other brand promises such a high level of comfort and such a good fit in riding clothing. Pikeur is known for the large selection of high-quality breeches.

The Pikeur breeches - the largest selection in equestrian sports

Matching breeches or riding leggings ensure a secure fit in the saddle. In contrast to normal trousers or leggings, it is precisely designed for the special stress of riding. Every Pikeur breeches is made of sturdy material and adapts flexibly to your body. This ensures wearing comfort through sufficient freedom of movement. Whether Pikeur breeches with grip or full seat, riding leggings for summer or soft-light breeches for winter - every Pikeur breeches offers an optimal fit thanks to the large variety of models. You can also find riding breeches in white for the next tournament in the large selection from Pikeur in our online shop.

Pikeur offers a very large selection of fashionable and functional breeches for women. The most popular models are Lucinda, Lugana, Candela or Hanne, which mainly differ in their trim, body height and other features. Breeches with additional functionality such as a cell phone pocket are currently very popular. The practical pockets are mostly on the back of riding leggings or on the side of the leg so as not to restrict freedom of movement. But there are also jeans breeches or the classic variants with a mobile phone pocket or pocket.

Rodrigo, Liostro or Rossini are the most popular Pikeur breeches for men. In classic colors with a pleasantly comfortable cut, the right breeches for every rider can be found at Pikeur. Here, too, Pikeur offers riding breeches with grip, full seat or softshell for the winter. Through experience from the last six decades, Pikeur knows what is important when it comes to riding breeches and therefore has a high quality and durability that often exceeds expectations.

Even though breeches are probably the main product of the Westphalian equestrian fashion manufacturer, Pikeur also offers other outerwear. Jackets, pullovers, waistcoats or shirts with the Pikeur logo are particularly popular and can be easily combined with everyday clothing thanks to their subtle look. Winter jackets and coats as well as fleece jackets complete the range in winter. In addition, Pikeur offers a wide range of competition shirts, white breeches, competition jackets and tails in classic colors such as Navy, Black or Gray. Pikeur also offers the Pro Safe riding helmet in different versions.

Whether fashionable jacket, parka, coat, waistcoat or functional jacket - Pikeur offers a wide range. In the current colors of the season and with a subtle Pikeur embroidery, the jackets can also be combined very well with jeans and sneakers in everyday life. In most cases, the jackets have a pocket on the inside for important things such as a cell phone or wallet.

There is hardly a brand that is represented at tournaments as often as Pikeur. With tournament jackets and jackets, as well as the Pikeur tailcoat in the higher classes, the company shows itself in subtle colors. If you like it a bit more conspicuous, you can choose a Pikeur jacket with glitter, which glitters properly but still looks classy. The elastic fabrics make them chic and still comfortable.

The new Pikeur spring-summer 2021 collection comes in fresh colors such as aquamarine and aubergine. But also popular classics in Navy and gray are back and go perfectly with the Eskadron Combine equestrian items.

The new Pikeur autumn / winter 2020 collection again contains many beautiful transitional and winter items, such as riding jackets, undershirts and other riding fashion. The colors can be described as more classic, they are largely determined by dark blue and graphite blue.

PIKEUR - official supplier of the German Olympic Committee for Equestrian

For more than six decades, Pikeur has been providing us with the latest equestrian fashion. Pikeur was founded in 1957 as the first equestrian clothing company for industrial equestrian clothing. In 1990 the company was taken over by the Brinkmann Group and re-established. Thanks to the passion for equestrian sports, Pikeur is constantly developing new products at the top level and has developed into one of the world market leaders for equestrian fashion. Perfect fit, high durability and functionality as well as modern, sporty designs make the company one of the world's leading manufacturers of equestrian fashion. This is also evidenced by the large number of prominent partnerships in equestrian sport. As the official outfitter of the German Olympic Committee for horse riding in the disciplines of jumping, dressage, eventing, driving and para-Equestrian convince with its high quality. Isabell Werth, Ingrid Klimke, Simone Blum or Meredith Michaels-Beerbaum, Ludger Beerbaum, Marco Kutscher and also her partner Eva Bitter were all able to win at international tournaments and championships in the typical red Pikeur jacket. Pikeur is also always represented as an outfitter at the Olympic Games and World Championships.

The advantages of our shop: